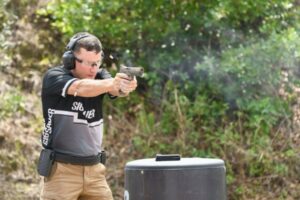 Please join us in welcoming champion shooter, Daniel Horner, to the TYR Tactical® family as our newest Brand Ambassador.

“I’m thrilled to be an ambassador of TYR Tactical because I’ve had the opportunity to use their equipment for several years and it has never let me down,” said Daniel. “The quality is the best in the world, as are the people who work there.”

Daniel is undoubtedly the best multi-gun shooter in the world. Over his 20 years of competitive shooting, Daniel has accumulated hundreds of wins under his belt. During his 13 years at the prestigious United States Army Marksmanship Unit, he dominated the multi-gun circuit and won several of the most elite team sniper matches is the United States. After leaving active duty, Daniel is excited to continue his unrivaled performance in the shooting sports.

Daniel’s competitive edge and skills cross over to all types of shooting. He has taken the lessons learned from competitive shooting and has used them to prepare soldiers, sailors, Marines, and airmen for combat.

When Daniel isn’t shooting, instructing, or assisting with product development, he enjoys duck hunting with his best boy, a black Labrador retriever, named Zeus. Daniel lives in South Georgia with his wife, step-daughter, and four dogs. “I look forward to bringing the TYR Tactical brand even more visibility; I use Tyr Tactical products just about every day either hunting, training, or competing,” said Daniel.