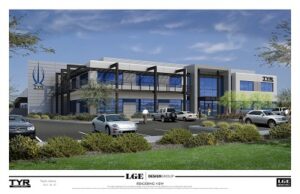 Construction has started on a new 76,000-square-foot headquarters and manufacturing plant in Peoria for tactical body armor manufacturer TYR Tactical.

TYR makes body armor for the FBI, DEA, U.S. Secret Service, SWAT teams in Scottsdale, Peoria and Glendale as well as the Emergency Service Unit in New York City and police in Boston, Dallas and the Royal Canadian Mounted Police.

TYR already has two locations in Peoria and 208 employees in Arizona. The company has 280 total with operations in North Carolina and Ottawa.

LGE expects to have the new building completed next spring. LGE is also serving as the architect for the project, according to David Sellers, LGE Design Build’s president.

TYR officials said sewing technicians who help fashion and assembly body armor will make up much of the expected 125 new jobs from TYR.