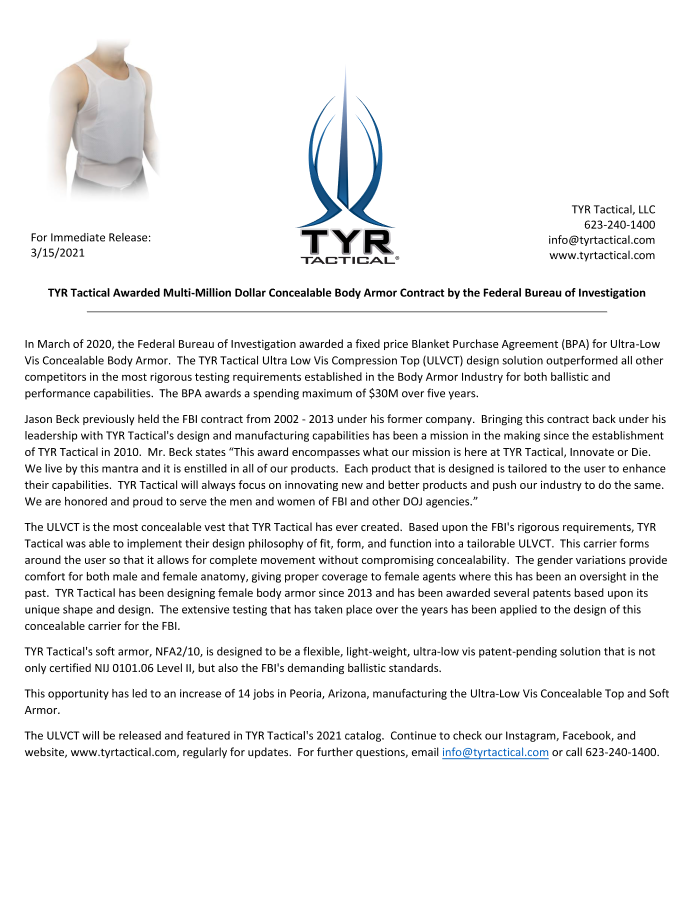 In March of 2020, the Federal Bureau of Investigation awarded a fixed price Blanket Purchase Agreement (BPA) for Ultra-Low Vis Concealable Body Armor. The TYR Tactical Ultra Low Vis Compression Top (ULVCT) design solution outperformed all other competitors in the most rigorous testing requirements established in the Body Armor Industry for both ballistic and performance capabilities. The BPA awards a spending maximum of $30M over five years.

Jason Beck previously held the FBI contract from 2002 – 2013 under his former company. Bringing this contract back under his leadership with TYR Tactical’s design and manufacturing capabilities has been a mission in the making since the establishment of TYR Tactical in 2010. Mr. Beck states “This award encompasses what our mission is here at TYR Tactical, Innovate or Die. We live by this mantra and it is instilled in all of our products. Each product that is designed is tailored to the user to enhance their capabilities. TYR Tactical will always focus on innovating new and better products and push our industry to do the same. We are honored and proud to serve the men and women of FBI and other DOJ agencies.”

The ULVCT is the most concealable vest that TYR Tactical has ever created. Based upon the FBI’s rigorous requirements, TYR Tactical was able to implement their design philosophy of fit, form, and function into a tailorable ULVCT. This carrier forms around the user so that it allows for complete movement without compromising concealability. The gender variations provide comfort for both male and female anatomy, giving proper coverage to female agents where this has been an oversight in the past. TYR Tactical has been designing female body armor since 2013 and has been awarded several patents based upon its unique shape and design. The extensive testing that has taken place over the years has been applied to the design of this concealable carrier for the FBI.

TYR Tactical’s soft armor, NFA2/10, is designed to be a flexible, light-weight, ultra-low vis patent-pending solution that is not only certified NIJ 0101.06 Level II, but also the FBI’s demanding ballistic standards.

This opportunity has led to an increase of 14 jobs in Peoria, Arizona, manufacturing the Ultra-Low Vis Concealable Top and Soft Armor. 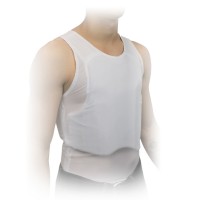